Hi all its awhile since i did a visit, but this was about to change, normaly i get an early morning call from Mark, we chat about the pigeons, and what we are upto for the day. he gave no clue that he was planning something, it was only when i got home switched the computor on and went on my favorite site, first topic i see is Kenny HIYA Matey, posted by Lighting McQueen ( Mark Brown ) 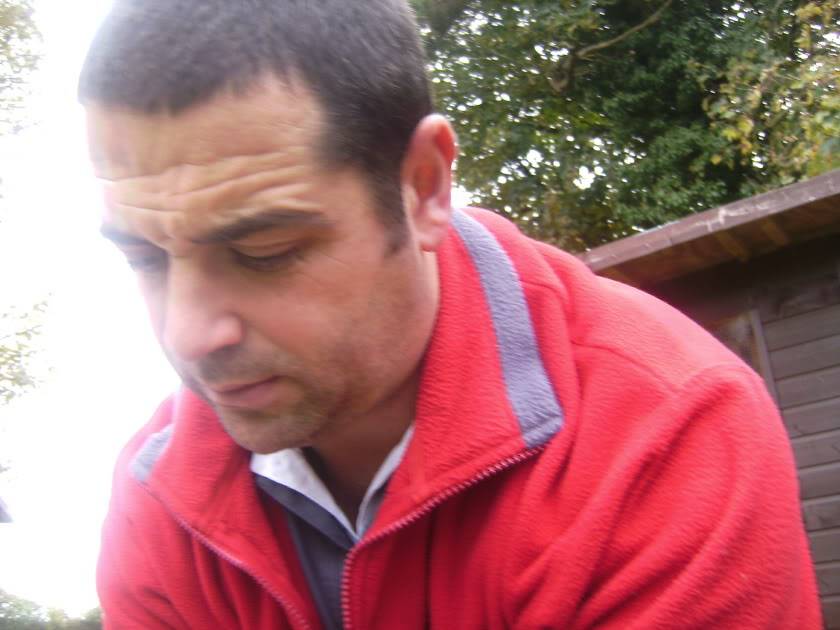 it took me about 20 minutes before i opened it, All it said was hi matey how u doing, now i was worried he was being nice so i knew he wanted something, to cut along story short after about an hour of him being very pleasant the truth came out, he wanted me to pay him a visit . No problem as i hadent seen him for awhile. You will need the van he said, Because you need to go to dads to pick up 10 sheets of ply and 8 nestboxes, so as you can see it was not me he wanted to see, it was my van, only joking Mark.
Anyway friday night i went round to his mum and dads Smilinassasin Pat and Vader Bill. loaded up the van ready for off saturday, Bill was comming with me, and we was hoping Charlie our mate would have a ride out as well, Bill,Charlie and myself are known as the three amigoes, but Charlie who must be touching 100 years old was off dancing so he declined prefering the fairer sex to us.
Sat morning i was up early gave the birds a quick scrape out, then set off for Bill got there about 09.00 he was already waiting, left st helens about 09.10 and headed down to hungerford, Bill did ask if i was putting the post code in the sat nav, but declined, saying we get lost using it, this time if we get lost at least i can blame you, Well guess what folks we dident get lost not once so that ruined my chance of blaming him . We did have a good crack , we came to this hill or should i say mountain ,Bill said he has to drop his car down acouple of gears too get to the top, i told him the van would do it no problem in 6th gear, and it dident let me down LOl i was on the verge of dropping a gear, when Bill said told you so, so i left it in 6th the van did it all the way, but if we had gone any slower we would have Stopped

.
It Took us about 3 hours to arrive at Marks. Bit of name dropping here he lives on the private estate of Frank Williams Formula 1 Fame, as we approched Marks home Mia comes running out to meet us . This is a picture of Mia and Marks Home 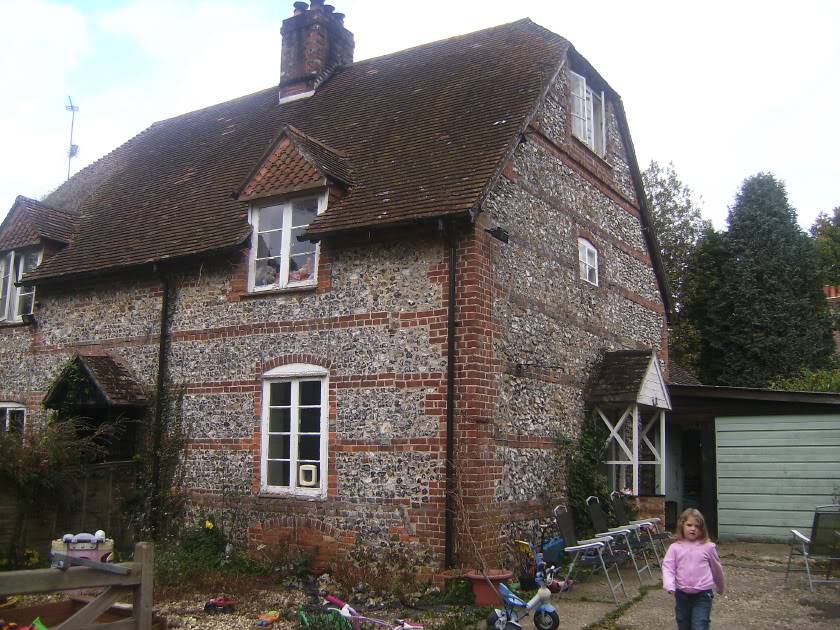 Ben marks son was the next one out followed by his mum Claire, It was great to see them all again, Mia and Ben were excited to see grandad Bill, and were soon telling him what they have been upto. Claire had made a pile of sandwichs enough to feed a small army, and a cup of tea waiting.
It was not long before we went down to the lofts the set up is two lofts as you can see This one is on the right as you go into the garden 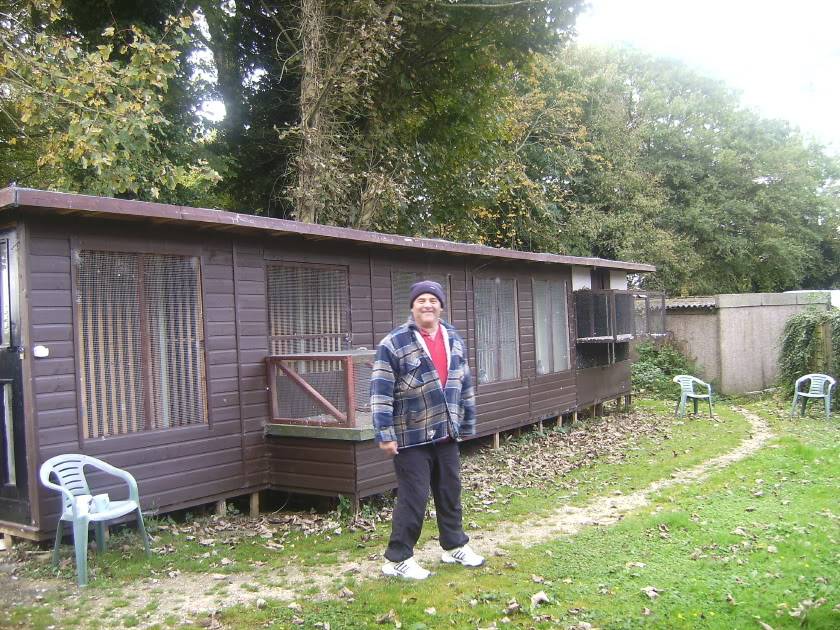 This one is at the top of the garden, both lofts were built by Mark. 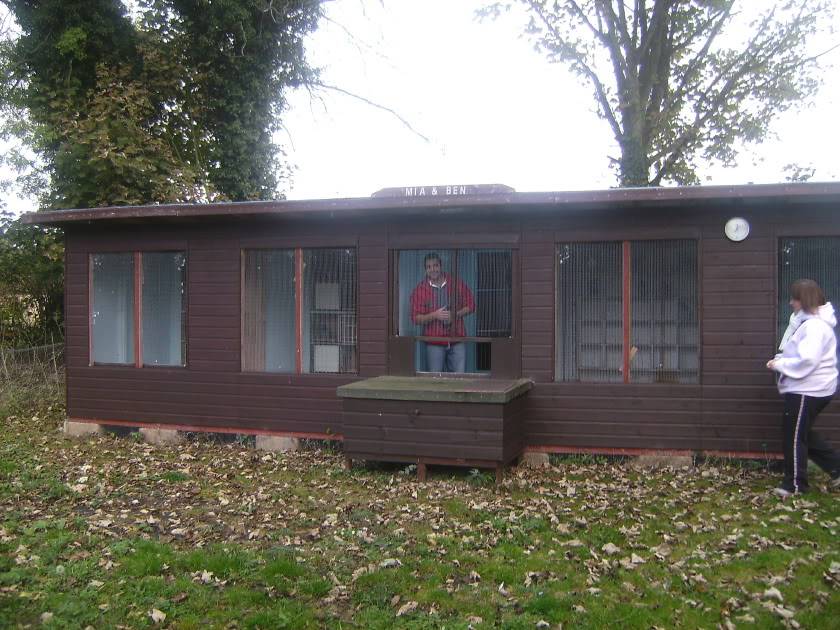 Mark started to pass us some birds through the trapping area for us to look at and handle, you can see Mark trapping area in the photo this is the same on both lofts Thats young Ben in the picture. 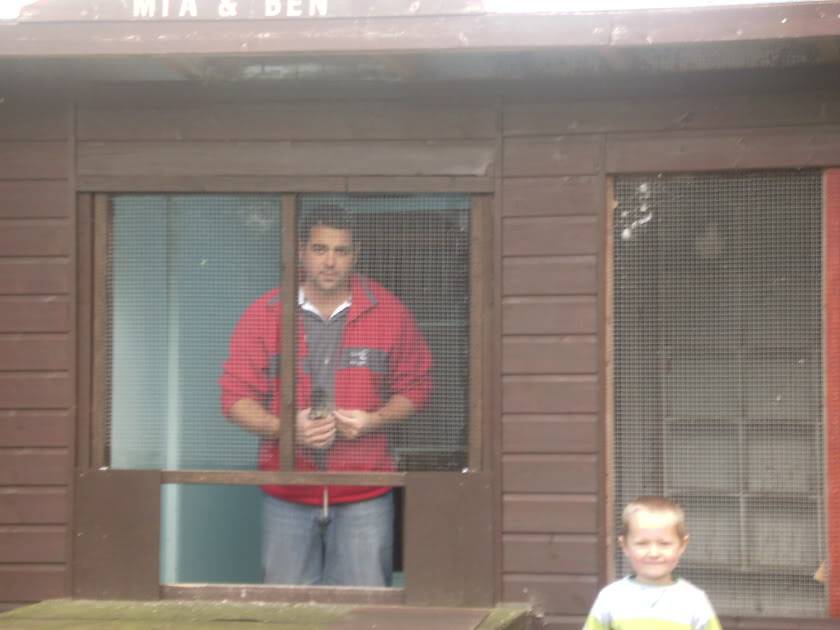 All the birds handled Brilliant, Mia wanted to show us snowy, so here is a picture of Ben Mia Grandad and Snowy and Ben with his pigeon 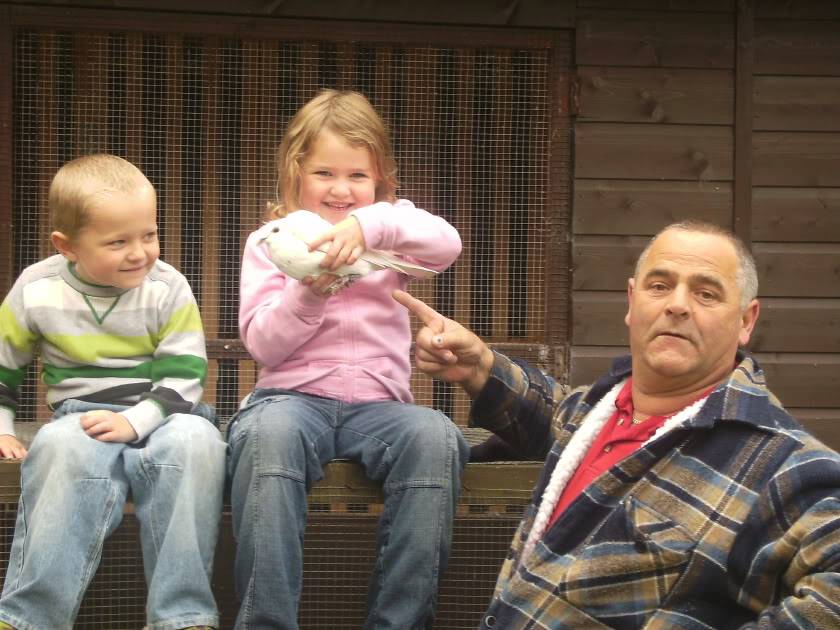 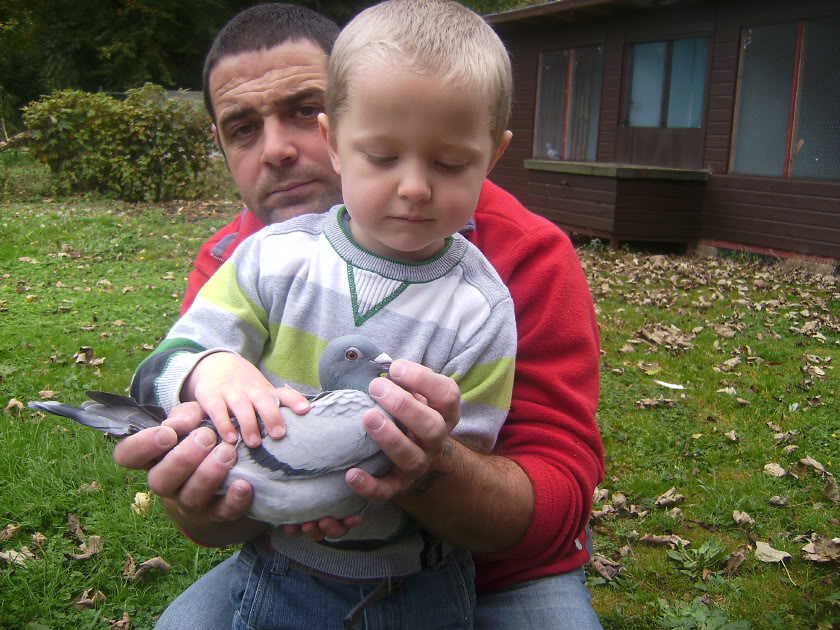 . Even the dog roxey wanted to have his picture so here is one with Grandad ,Claire and Ben so think i got every one in the write up 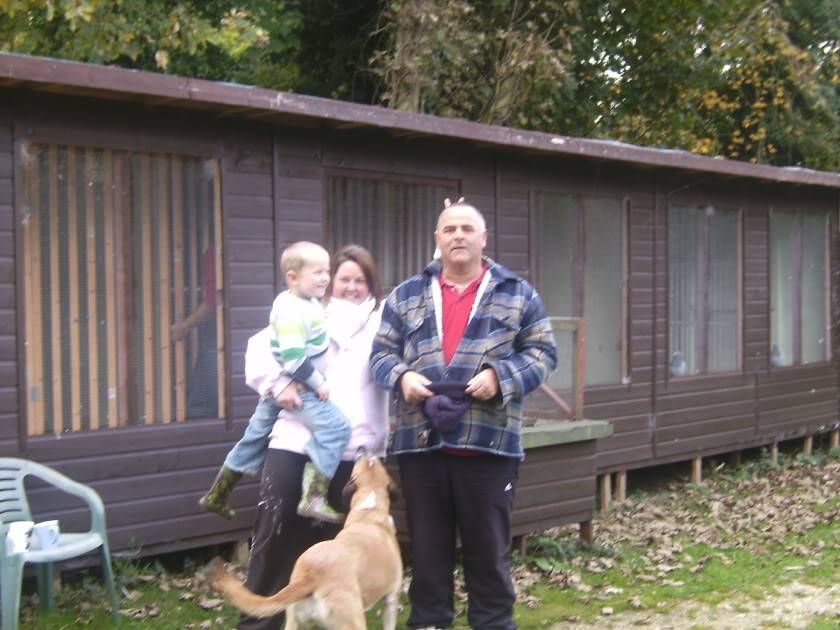 There family of birds are Gaby Vandenabeele, Janssen,Staf Van Reets and Batenburg with a few selcted others, there results speak for them selfs in 2009 in the aprox 28 1st including 1st section 23rd open Saints national flying club 1st section 3rd open Falaise BICC Club, his dad bill had 20 x 1st at club and federation, Mark had aprox 12 1st prizes as well they also let to birds go to a fancier in the northwest no not me both these birds won one Being !st club 1st fed 1st Combine Mangotsfield NWHU09E3101 the other one 1st club 1st fed 1st combine Yeovil NWHU09E3102 these were nest mates, so you can see they not only win for them but for others as well, including me. Before long it waqs time to leave so one LAST CUP OF TEA then back in the van and home i dropped Bill off abot 17.00 had a cup of tea with Pat and Bill then left, where again it was a quick scrape out of the birds and then my tea, well thats its folks hope you enjoyed it, Mark, Claire Mia and Ben Thanks for making us welcome see you soon
Ken AND Bill (grandad)
rene

LOl got there no problem rene just got lost comming hom

Very nice,again this is what sites should be about,people and pigeons,well done to all concerned.
Sponsored content