Trip to see Fred Holbard from Cheshunt
This little article is about a day out to Fred Holbard who lives and races his pigeons in Cheshunt .
Best place to start is from the beginning, im always up early and at the moment it is light enough at 06.30 so i let the cocks out, while i cleaned all sections out, now the birds are split it dosent take long, the birds flew for about 20 mins once all in and fed, it was time to go fill the car up and head tp St Helens to pick my mate up Bill , Pat was up and about when i got there, makeing sure Bill had got everything like phone, his cap etc ,any way at 08.00 we hit the road set the sat nav and off we went. It ws not untill we were on the M1 that Mark rang who is Bills son, asking how we were doing, not really listening Mark must have asked where we were heading too, and Bill being Bill told Mark we were heading towrds Chesham and not Cheshunt, so Mark told him we were going the wrong way , but as i said to Bill the miles on sat nav were still going down so we must be on the right road, fingers crossed. We got to Freds at about 11.00pm we knew we were in the right place because we soon spotted the birds flying round.
Bill greated us at the front door, invited us both in, Fred introduced us to his Lovely wife Denise, who kept the tea comming while we there, Fred did say to Denise 2 extra for dinner, but sadly we had to decline as we were also going over to see Bills son mark over at Hungerford, But that was a great gesture from Fred and denise, We sat in the front room for awhile talking about pigeons putting the world to rights n the pigeon front, to be honest i could have listened to Fred allday. After about 30 mins and another cup of tea Fred took us into the back garden to see the birds and set up, the set up is excellent as you can see by the photos, but Fred did say that he alters something every year, just to get that little bit more out of the birds, he said he aso tweeks his system every year so no two years are the same always trying something different like one year he trained his birds for racing in janury and as he said this gave hime the jump on the first shorter races, but not for the longer races later on , so he dident do that again, to stay ahead you have to try things if you stand still u dont move , thats the same with pigeons.
The First picture is of Fred and Bill outside his racing loft 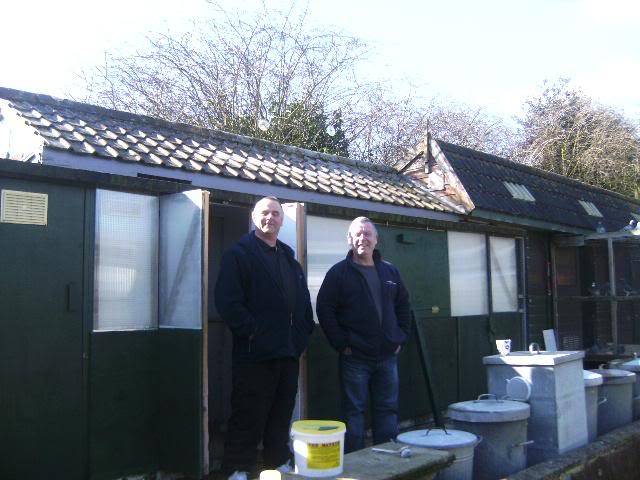 The birds were out excercising , Fred was telling us that he has trouble with Hawkes, so likes to be out in the garden when the birds are out. and when you look at the results of these bids you can understand why.
Fred got involved with pigeons because of his dad , Fred was telling me that is dad won the mighty London north road combine from Fraseburgh and was 3rd young bird national south road, his dad also won the BICC from Bordeaux 500 miles on the south road. Freds father inlaw was Brian haley, who himself won 2 x London north road combines one from Morpeth and one from Stonehaven. Sadley Fred lost both these gentlemen within 6 months of each other in 2001, which incidently was the last time Fred won the London north road combine, and both these gentlemen were in the garden to see it. So as you can see Fred had some keeping up to do, having served his aprentiship under is dads guidence
The next picture is of Freds Stock loft 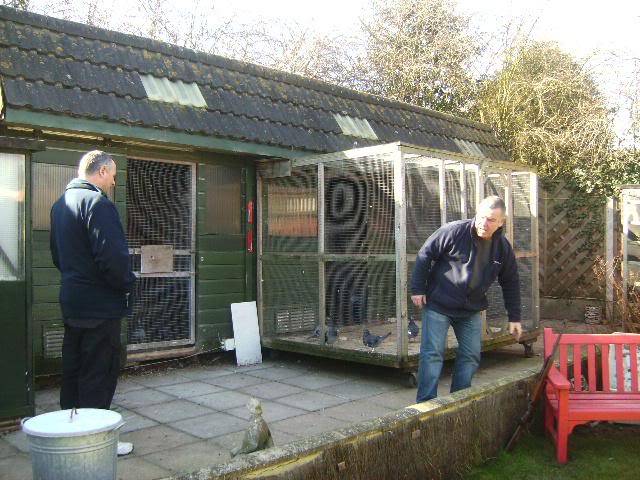 Here Bill noticed that the avery is on wheels so it can be moved if needed, ( Bill dosent miss a trick) . Fred told us that at one stage the avery was not attached to the stock loft, and a fox managed to push its way in killing one of the young, if he hadent heard the comotion the fox would have gone back and killed them all, this happen about 04.30 in the morning as Fred is another one who believes in the earley training before work.
The next picture is Bill holding one of Freds new stock birds he as brought in this being a Bussheart 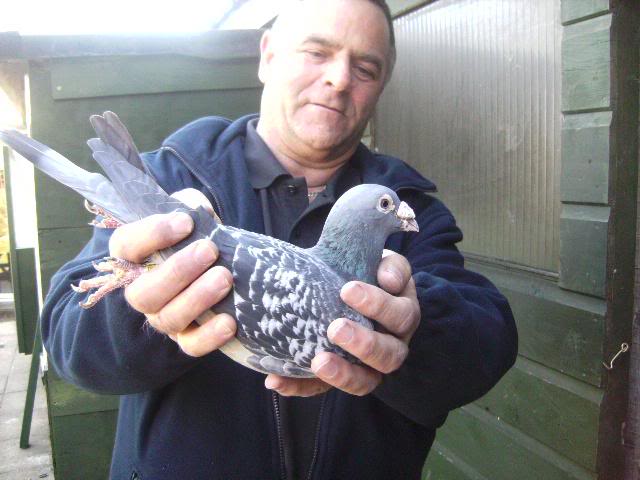 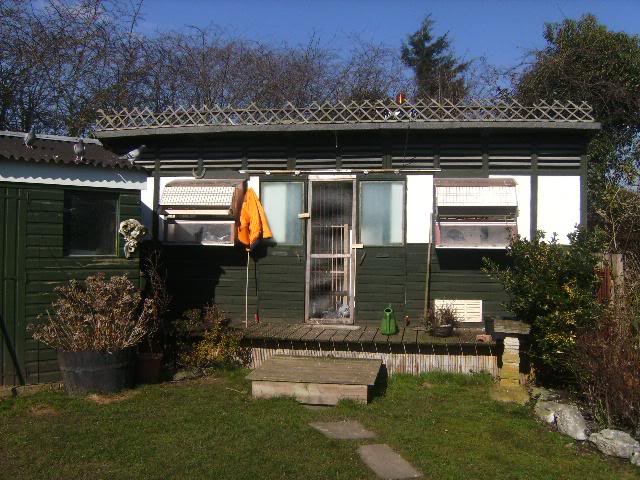 Notice the ventalation Fred as wrote about this on ventalation topics on the forum and it was good to see this close up, Fred even brought apair of step ladders out so we could get a better view looking through the vents, the roof space is also insulated but fred can control the air flow from the ceiling, i was really impressed with the air that was being pulled through this system, i think i will have ago at copying in the close season, the other thing is Freds flashing beacon on the young bird loft, this is switched on every time the birds go out, on the one occasion he dident put it on the birds got hit by an hawke loosing a couple of birds in the process, so now its light on birds out.
The next picure is of Freds Young Birds that have just been moved over, and they are a picture of health a real credit to Fred, Notice the easybed on the floor, 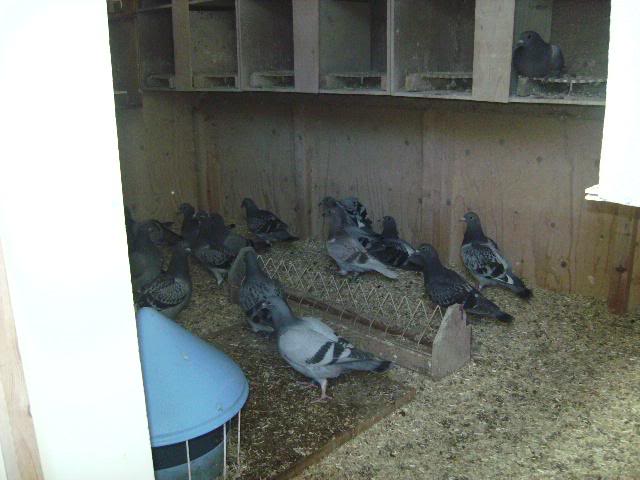 Thelast picture is of myself with Fred, Bill took this as he dident think my camera was strong enough to take my photograph

so here it is proof that i have a good strong camera. 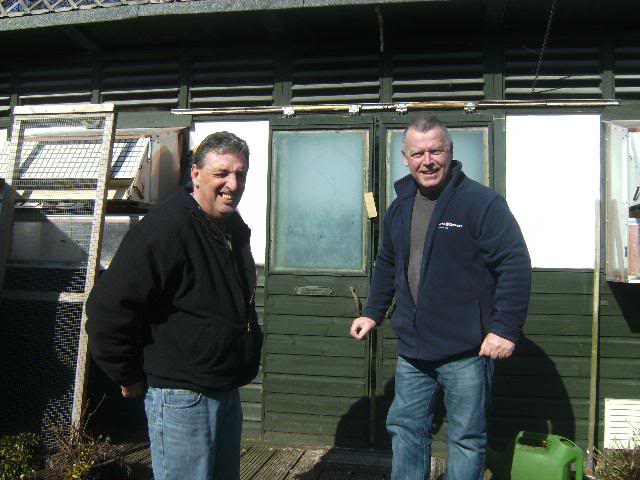 I asked Fred when did he first come into the sport, this was in 1969 when he flew with his dad, till he got married to Denise in 1977. Fred started on the south road first, in 1975 it became compulsary to vaccinate the birds and wee told to jab the birds half way through racing, he turned north road. Freds dad didnet have a problem jabbing the birds, but as he said it should be done in winter. In 1984 Fred turned north road again, he purchased Busschearts from the old comrades show at the Ally Pally. In 1985 1st 4 birds "Sonny" Bred by Brian Haley "Don T Look" bred by LPW a double garndaughter of "ShyLass", " Brians Choice brought at the Busscheart auction and "Hot Foot" bred by John Plmer of Kent, These were the parents of Freds !st combine winner " Denise" 1st London north road combine Morpeth youg birds 6,500 birds vel 971ypm 250 miles.
Myself and Bill could have stayed all day listening to Fred, but we had to leave as we still had to travel to Marks homein Hungerford. To me Fred is a very far thinking fancier always looking for the next edge, tweeking things here tweeking thinks there never standing back always looking forward for improvements totaly dedicated, ad i wish him all the success in the world and look forward to reading about him in the national papers when he wins his next open . Fred Thankyou for makeing Bill and Myself very welcome at ur home showing and sharing ideas with us and for the youngbirds, and hankyou to Denise for putting up with us. and we look for ward to seeing you soon
Ken and Bill
P,S as people who know me and bill are normal trick is to get lst going to places, well not this time, we got lost comming home from marks ended up on wrong side of m5 going to Bristol not Midlands, so we still have the record of getting lost every trip

glad you found out how to put it up mate
MIKE1957

rene wrote:a very good write up ken and a good read keep on

glad you found out how to put it up mate

very good post. this is what the site needs keep it up